Poop seems to be a recurring theme in life. For obvious reasons, but for me maybe more than most.
While attending COB, one of my part time jobs was kennel care technician at The Bahamas Humane Society. This involved shoveling and collecting poop from dozens of dogs in a day and probably hundreds in the time I worked there. All colors, viscosities, shapes and sizes. There was a trick to it. We would put a large trash bag in a milk crate and push it around as we scooped poop in. Then you had to get the bag of poop into the dumpster. 4 gallons fit in those crates, water is more than five lbs per gallon, so about 20-30 lbs of mixed dog poop. You have to pendulum the bag until you gain enough momentum to swing it into the container. Perhaps, I would have to show you.
Then after returning home with my Master’s degree, the job scene was not the best, but I got to work behind the scenes at Dolphin Cay Atlantis as a Scuba diver in the Marine Mammal exhibit. And yes, a big part of the job was getting rid of the Sea lion poop. They also call them sea dogs. For funsies. Anyway, we would be under about ten feet of water in cement pools. Using trash pumps with a four inch diameter hose. The poop would be sucked through the trash pump and passed into the filtration system. But there was a trick to it. Sometimes, sea lion poop is too big or too heavy to get into the hose. So, you would have to whack it with the tip of the hose. The poop would start to break up and you would suck the poop out of the water before it hits your face.

Now finally, I am a dad and yes, there is poop, but I am ready. I found the tricks. Firstly, be prepared. I was not ready for the black poop. Nobody is. But the brown and green and yellow poops, sure. Here at the tips and tricks. 1: take a breathe before opening the diaper.
2: have a wipe handy to cover the genitals before you start. If they can, they pee and they get really good distance.
3: always, turn down the top of the front of the diaper, and/or point he penis down into the diaper. See above. 4: don’t expect that to be the last of the poop. It never is. 5: their hands and feet will be flailing, keep them out of the poopy area. Finally, have fun, you will be doing this a lot. 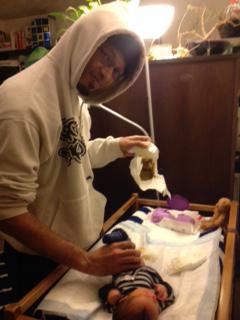